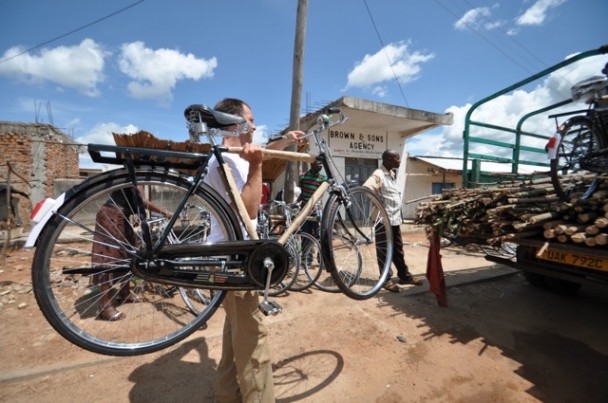 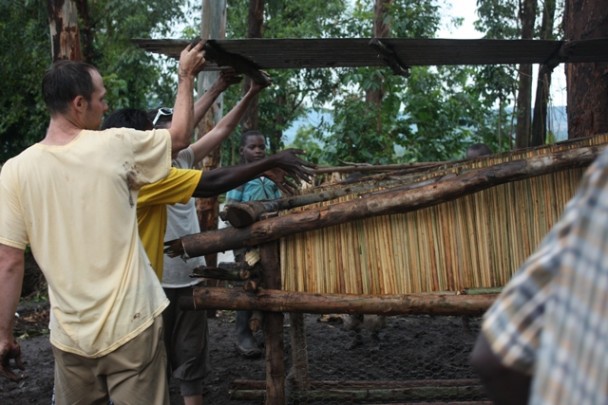 He woke up with the roosters around 6:30am, got dressed and headed to the hardware store, lumber yard and car park on a boda-boda to order and purchase the chicken coop materials. He’s in a different country and doesn’t speak the language, so this isn’t an easy task. But he’s been negotiating and dealing with the panga-swinging lumber jacks, tin roof salesmen and truck drivers for weeks and has the process down to a science. By 8am, the truck is loaded with hundreds of logs, binding wire, dozens of papyrus  sheets, 4x4s and huge rolls of wire mesh. After picking up the build team and a TASO counselor, they set out on the 1.5+ hour drive to Soroti to deliver coop building materials to 10 families. Despite the unanticipated detours to the TASO Soroti center and a trip to town to purchase bicycles (a task delegated to someone else), he kept his cool and loaded the bicycles onto the truck with a smile.

Sitting atop the wooden poles in the back of the truck under the hot, African sun, he waved to each villager along the bumpy, crater-spotted country road. The storm clouds started looming around 6pm and there were still 5 homes to visit. In the cold rain, he handed each wooden pole and role of wire mesh to the families with a smile and patience. He graciously unloaded the rest of the materials to the last family at 9pm with mud everywhere, no light, and rain pouring down. And during the 2+ hour drive back to Mbale, he stayed in the bed of the truck, crouched under a flimsy tarp so that one of the builders, Eric, could sit in the truck cabin. 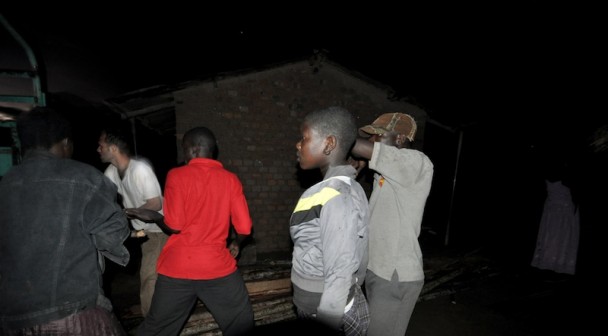 This nonstop, dedicated work began months ago, at his desk in New York, NY. He worked out an arrangement with his firm to scale back his hours (and salary) in order to commit more time to the Poultry Project. He spear-headed the nonprofit status filing for the organization, mobilized the US and Uganda Poultry Project teams, developed detailed budget and record keeping tools, organized a detailed schedule and workplan for the Expansion + Coop Design/Build Initiatives, set up weekly conference calls with the Uganda project manager, and created an assessment survey and measuring system for participant selection (he did other administrative and programming tasks, but there’s too much to mention). In his down time, he raised money to fund to the May intiatives.

He arrived in Uganda only three weeks ago. In this short time, he’s already overseen 30 home visits, 3 training workshops, acquisition and distribution of coop building materials and bicycles to over 50 families, and 7 coop builds. He wakes up early and goes to bed late. He works all day long and rarely breaks. He does this work with love. He shows the Poultry Project participants that with hard work and determination, anything is possible.

Joseph Pavlick’s compassion, rock-solid work ethic and commitment to improving the lives of AIDS-affected children has made the Poultry Project what it is today. We are  grateful to have him on the team.