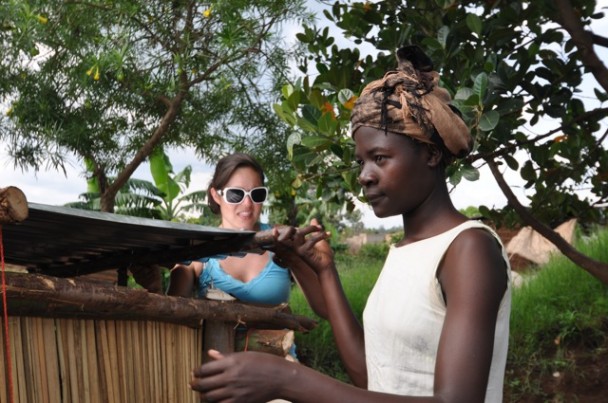 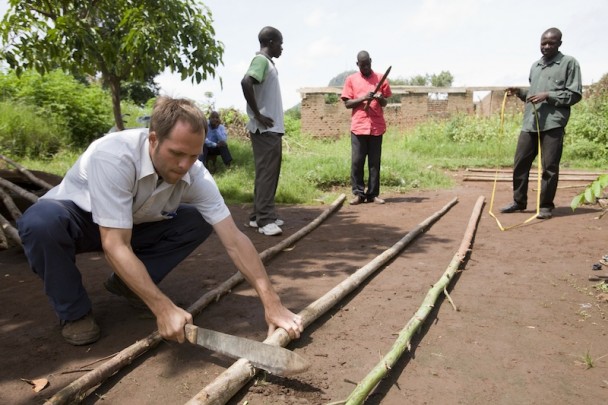 I take a mostly passive role in the coop building. I sit on the sidelines and watch as the build team turns papyrus sheets, wire mesh and tons of wood poles into a gorgeous, sturdy chicken house. On Wednesday, they built Tracy’s coop with the help of Ambrose Milton. TASO Tororo counselor, Debra, recommended Milton for the job. Milton is in Senior VI and TASO helps pay his school fees. A year ago, Milton’s mother left an abusive relationship, disappearing into the night, and nobody knows where she is or what happened to her. Milton’s father was never around and he has no siblings. He stays at the hostel attached to his school free of charge because they understand his unique situation and are willing to help. Milton will work with the build team to construct the other 9 coops in Tororo. This opportunity will help Milton gain new skills and earn income to help pay for his Senior exams. Milton plans to go to university and he is hopeful that he will see his mother again.

Emily Axtman (Emily A.), David, Eric, Joe and Milton built Tracy’s coop in 4 hours, working nonstop. Kevin put down the camera several times to help build. Emily and I cut the binding wire (it’s become our coop task). Tracy’s home is near a freight train and an amazing granite rock formation that sits in the center of Tororo. As with most coop builds, the neighborhood children flock to the scene to check out the muzungus and watch the build. Initially, we occupied the children with some colored pencils and legal pad paper. I drew a silly picture of a tree, bird and two monkeys. With only 12 pencils and over 24 children, sharing had to happen. One of the boys suggested that 2 people share one pencil. The arrangement worked well and the children began drawing under the nearby mango tree. One by one they ran home to gather their own pencils and pens, so within minutes they each had something to draw with.  We walked over to see what they were drawing and they all were drawing a rendering of the picture I drew. It was amazing. 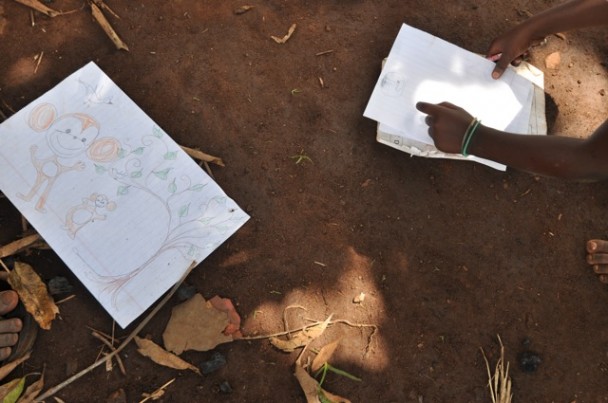 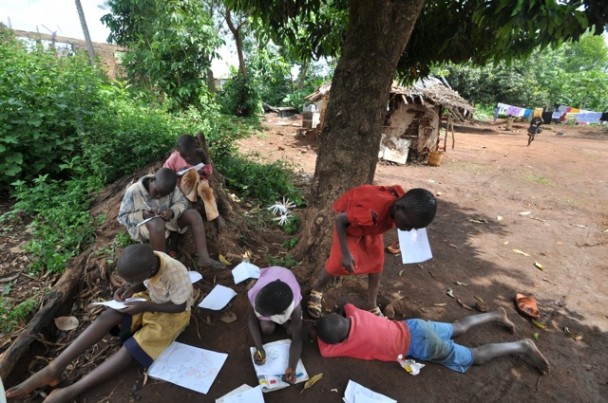 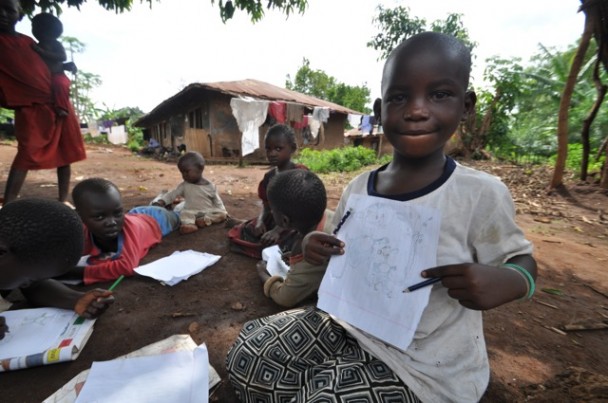 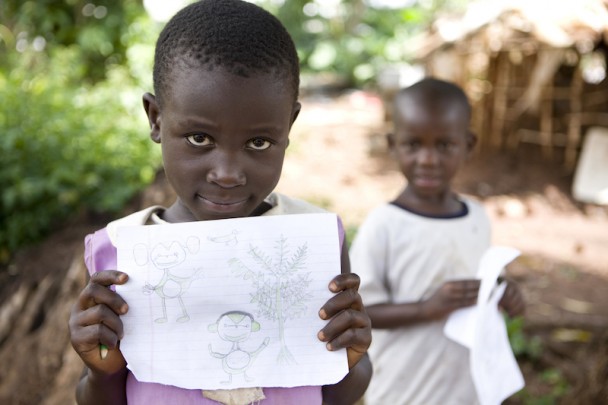 But the drawing activity soon lost its luster and they were back at the build site observing the process, eager to get involved. Emily A. took note of their curiosity and patiently instructed them in binding the wire mesh to the wooden frame with wire. The children listened and watched intently and began twisting the binding wire tightly and cutting the ends with the pliers.They were so proud about their contribution to the coop. I’m so glad Emily A. took the opportunity to engage them in the process and teach them a few building tricks. Satisfied with their building foray, the children returned to the drawing after Emily A. sharpened their pencils with her pocket knife. 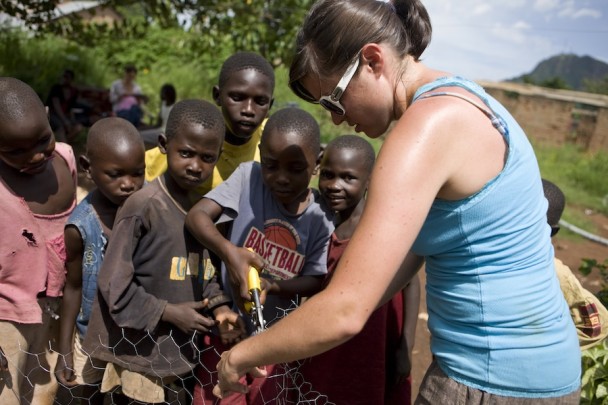 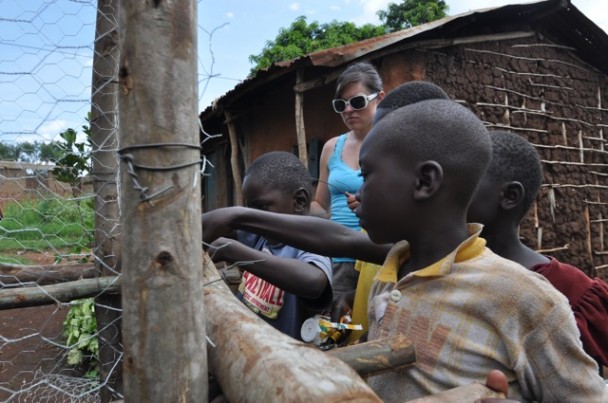 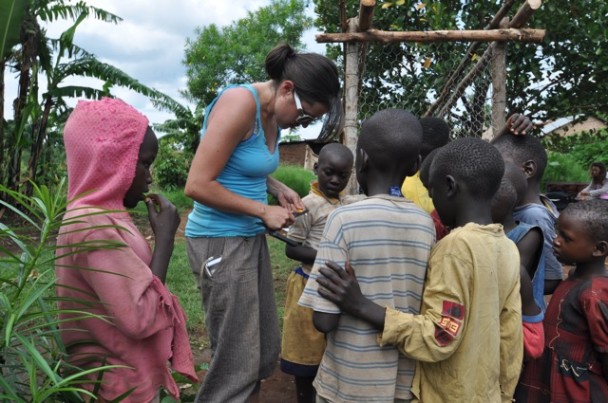 It’s really amazing to see the group work together, engaging the community and family in the building process. Tracy went to fetch sand for the cement mixture and Sharon borrowed a hoe from the neighbor to mix the cement. Joe, Milton, David and Eric used pangas to dig the holes for securing the coop in the ground. Dirt was added to some of the holes to make the coop level. David worked on the bird ramp while Joe and Milton nailed wooden poles to the tin roof. Kevin and Eric put the papyrus sheets on the coop panels. Eventually, the coop came together and the team showed Tracy how to use it, clean it and repair it. Another coop built, over 25 to go. Fortunately, after Joe and Emily A. leave, the team they’ve trained-David, Eric, John, and Milton- will build the remaining coops together and earn money while they do it. As Emily A.’s t-shirt says, “Design. Build. Transform.” 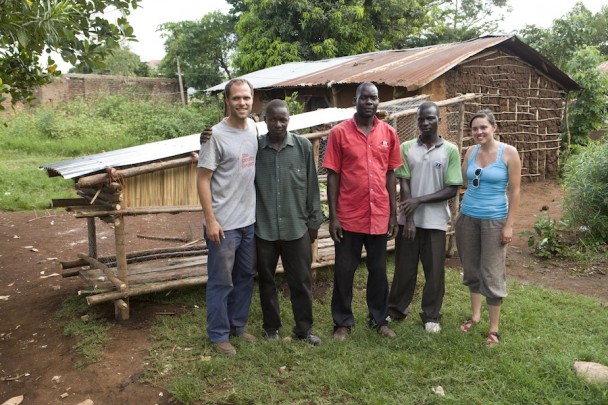