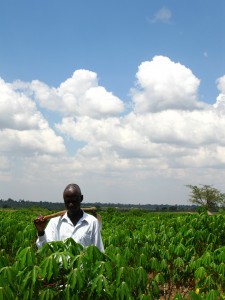 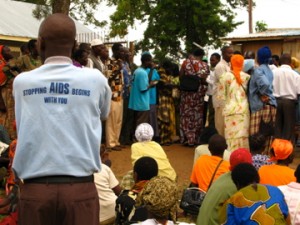 Hello Everyone! My name is Kate Hesel and I am one of the current GWU fellows working at TASO. Kelly has asked me to occasionally blog about my experiences at TASO and in Uganda. Here is my first entry!

The past three days we have been away from the center, and out in the field, which I’ve been thrilled about. The first day we went out, we were accompanied by 4 doctors, 6 nurses, 5 counselors, pharmacists, managers, and organizational staff. We all oaded into several TASO Land Cruisers and went to a government-run clinic about 40 minutes North-East of Mbale. The government allows TASO to come to the clinic once a month to hold its outreach clinics—designed for TASO’s clients that are too sick, poor, busy, or live too far away to attend the center in Mbale for services (TASO holds these twice a week, Wednesdays and Fridays, in different locations around the Mbale district). The clinic runs exactly like the centers do – patients see doctors, counselors, and receive medication. TASO also brings other services to the clinics, such as massage, aromatherapy, and CD4 counts. We had several roles that day, but mainly spent the day measuring out medication and distributing it to the people waiting. We sorted everything from Paracetamol, Ibuprofen, Magnesium, Amoxicillin, Erythromycin, several anti-depressants, Flagyl, Septrin, and ARVs (Anti-Retro Virals, the medicine used to fight HIV). We also handed out food, registered patients, performed triage, and helped out wherever we were needed. It was a tiring day, but completely fulfilling and exactly what I have been waiting to do since I arrived in Uganda.

The next day we went out for home visits to see people who are benefiting from TASO’s Sustainable Livelihood Projects (SLPs). SLPs are given to people or families who are infected with or affected by HIV. They are designed as income generating activities that can enhance the lives of people living with HIV/AIDS. The Poultry Project is one of these activities. TASO has partnered with other organizations such as Heifer International to give land, seeds, animals, sewing machines, etc, so that people can earn extra money while fighting the disease. We first went to visit a man named Joseph, who was “resurrected” by TASO (his own words). Joseph worked on the border of Uganda and Kenya before diagnosed with HIV and returning home to his village in Mbale. His CD4 count was at two (basically death’s door) before he went on ARVs through TASO, which also gave him some money to purchase some land around his house. He now has multiple fields growing all sorts of local foods, all of which he sells to make a substantial living and support his entire extended family. He is one of TASO’s biggest success stories. He thought us three white girls visiting him at his house were hilarious and wouldn’t let go of my hand the entire time we were at his house and in his fields. It was a great experience.

We made two more visits to other households during the day, one to a girl who TASO is supporting by paying her school fees, and another family that is being supported with school fees and by the provision of several hoes so they can make a garden in their backyard. The head of that household was an orphan who already had two children of her own and was taking care of her brothers and sisters. One of her own children was born with an excess of fluid in her brain and even now, as she is six years old, has a gigantic head that needs continuous medicine to keep the fluid draining. Unfortunately, “continuous” medicine is hard to come by when you live 45 minutes away from the nearest hospital by car, and you don’t own a car, or a bike. Nothing here has a quick cure, almost no one lives near enough to a hospital, let alone a doctor. TASO’s field officers spend their days in trucks and dirt bikes trying to reach these people. I can see the work is exhausting but extremely rewarding.

AIDS is everywhere in Uganda, and subsequently TASO is a household name. TASO is almost singlehandedly responsible for controlling the disease within the past 20 years in Uganda; it’s a feat that is so unbelievable many people believe that TASO practices witchcraft – this success could only be from higher powers. Our guard, Tom, spent last night telling us about how his sister is HIV+ and her children are sponsored by TASO to go to school. Everyone seems to have a story like this – the disease affects everyone, directly or indirectly; there aren’t limits to its reach like back home. It was particularly moving at the outreach on Wednesday when we were surrounded by about 300 HIV+ people – I can’t even count the people I know back home who are HIV+ on one hand. In any event, the past few days have been very fulfilling and have given me such a great appreciation of the work TASO does here.

This coming week we will be spending more time at the center, designing the monitoring and evaluation plan for the SLPs, and for Kelly’s poultry project. I will blog again with more specifics about how that process comes along! Thanks for reading! 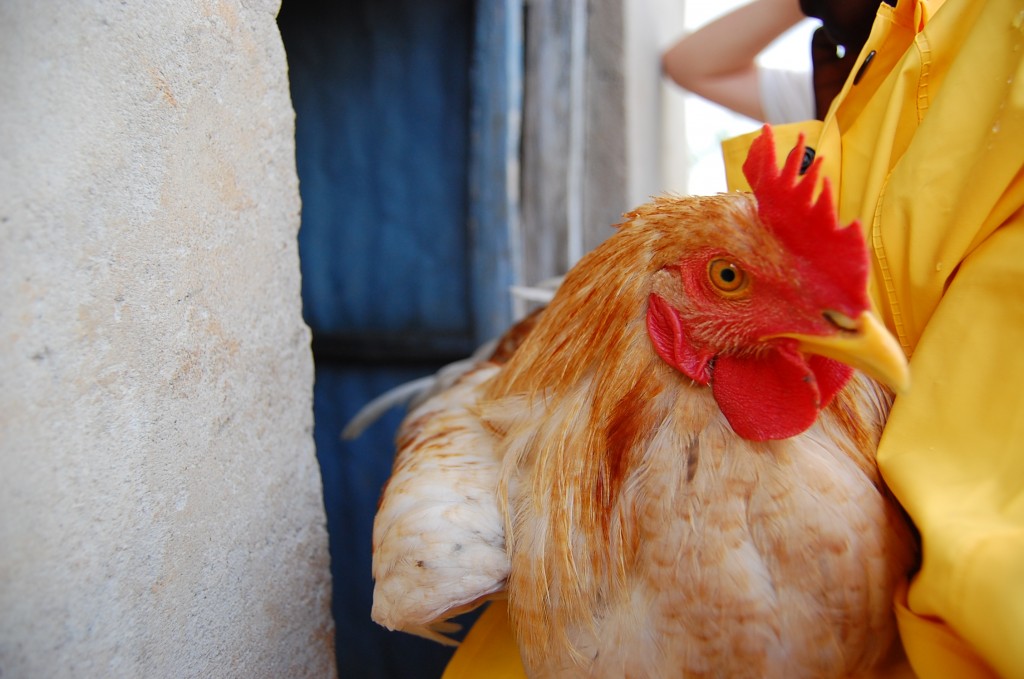 I am overflowing with gratitude – the GW MPH fellows have decided to conduct an evaluation of the Poultry Project.  Our project manager, Peter Welikhe, said they’re also planning a training workshop for our participants for early March.

Thank you GW fellows – your contribution to the Poultry Project is incredible! 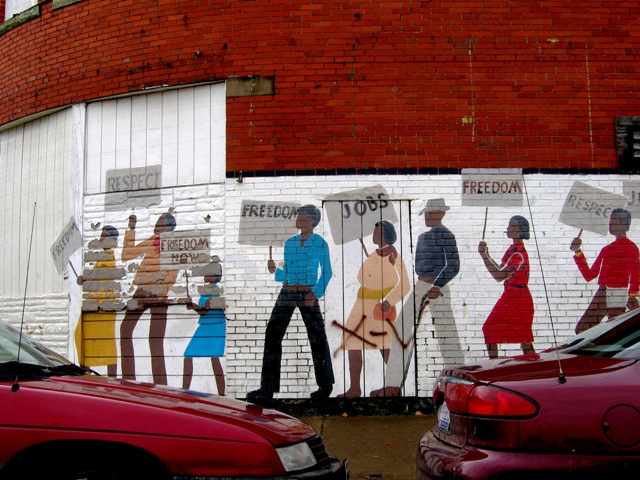 Is the Poultry Project working?  Is it meeting its goal of improving the lives of children affected by HIV/AIDS and their caregivers?  How much money do they make from egg sales?  Is it enough money to make a significant difference in their lives?  Why are some families’ more successful at keeping chickens and growing their business?

We are hoping to get some answers to those questions in the coming months.  There are some George Washington University MPH students doing fellowships at TASO Mbale and they may help us conduct an evaluation!   An evaluation is long overdue and essential if we decide to scale-up and expand the project to TASO’s other 11 branches.

The evaluation will be qualitative and participatory.  We’re considering the Most Significant Change methodology (suggested by alanna from blood and milk – an intl dev blog I respect and admire).  Do you have any suggestions?  I ask that question and smile because I think I’m the only one reading this blog.  I’ll keep you posted on the evaluation.

The photo above has nothing to do with the post but I like to add an image and I don’t have any evaluation-related photos.  This photo was taken on E.105th street in the Glenville neighborhood of Cleveland.

Posted in Uncategorized | No Comments » 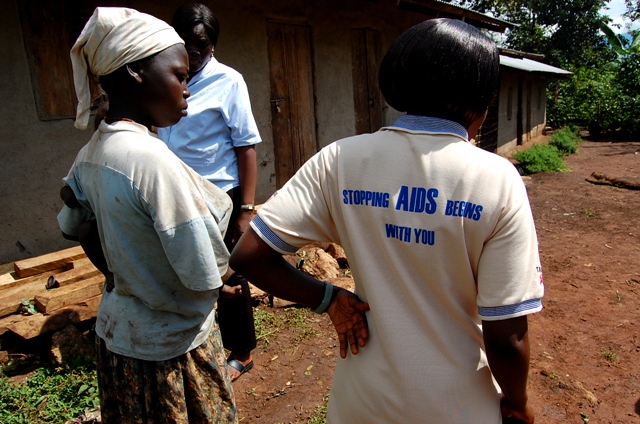 Aid Watch, a blog I love and read often, posted “How the war on AIDS was lost” in response to a recent Wallstreet Journal article about AIDS treatment shortages and increased HIV incidence in Uganda.  Both articles describe a shortage of AIDS treatment for the increasing HIV infections in sub-Saharan Africa, but then point to spending on treatment rather than prevention as the cause of increasing HIV infections.

I have worked in HIV/AIDS services for almost 5 years and what I know to be true, in the US and Uganda, is that treatment and prevention are interdependent.  I also know that HIV/AIDS is a complex problem with social, economic, political and public health factors – a complex response is essential.  There is not a silver bullet solution to HIV/AIDS.  And prevention is difficult.  The WSJ article praises the Bush administration for PEPFAR, but fails to acknowledge the misguided PEPFAR prevention policies that ignored evidence-based prevention practices in favor of ideology and may have contributed to increased HIV incidence in Uganda and other PEPFAR-funded countries. Finally, the WSJ article failed to mention the innovative and effective work of The AIDS Support Organisation (TASO), an indigenous AIDS service NGO in Uganda.  TASO uses a community-based approach to provide care and services to Ugandans infected and/or affected by HIV/AIDS.

Paul Farmer has spoken out against the treatment vs. prevention debate.  Here he describes the connection between structural violence and HIV, shedding light on the complexities of the HIV/AIDS epidemic and the need for a multi-faceted response (from Pathologies of Power):

Posted in HIV/AIDS | No Comments »